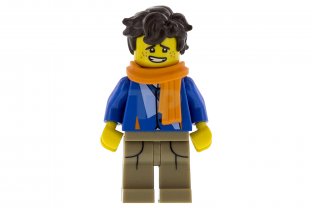 Notify me when there is new stock available for this item

Enter your email address below to receive a one-time notification as soon as we have new stock.

Customer reviews for this product

Write a product review for this article

There are no customer reviews available at this moment.

Do you like adventure, mystery and action? Then the Ninjago theme is for you! In the Ninjago universe, the ninjas fight evil.
The Ninjago theme was introduced by LEGO® in January 2011. This theme builds on the earlier Ninja theme.
Ninjago revolves around the young ninjas: Cole, Jay, Kai and Zane. They have all been trained by Master Sensei Wu to protect the island of Ninjago from evil forces. Every season there is a new episode. There are now 11 seasons, each with their own story and corresponding building sets.

Do you want to order individual Ninjago figures? ToyPro is the number 1 webshop for loose LEGO® minifigures and parts. So you don't have to buy the whole set if you only want that one minifig.

The ninja degrees of the minifigures of Kai, Cole, Jay, Zane and Nya can be recognized by their outfit. Ninja students only wear a sash with the symbol for their strength. If the student tamed his first dragon, he becomes DX Ninja and wears a dragon robe (a spitting dragon is depicted on the torso).

The next degree is Kendo Ninja. The Kendo uniform consists of a helmet and armor. As a ZX, Ninja wears the ninjas shoulder protectors with their scabbard for the Katanas. If the ninja uses the pure energy of his element he will appear as a NRG Ninja. In addition to these variants, there are also the Kimon, the Techno and a few other outfits.

There are also the desired variants on the side of the bad guys. In addition to the Skulkin skeleton army, there is the Stone Army, the Serpentine, the Nindroids, the Ghosts Warriors and the Sky Pirates.

You can search our online store by name of the figurine from the set and see which LEGO® Ninjago minifigures are in that set.

ToyPro also has an extensive collection of LEGO® Ninjago building sets. You will find Ninjago temples, markets, boats, motorbikes and of course the Spinjitzus. Arcade Pods with accompanying minifigures. We offer a fast delivery and great customer service.

Warning! Choking Hazard! LEGO contains small parts and is not suitable for children under the age of 3!

LEGO, the LEGO logo, the Minifigure, DUPLO, MINDSTORMS and LEGENDS OF CHIMA are trademarks of the LEGO Group. © 2020 The LEGO Group.